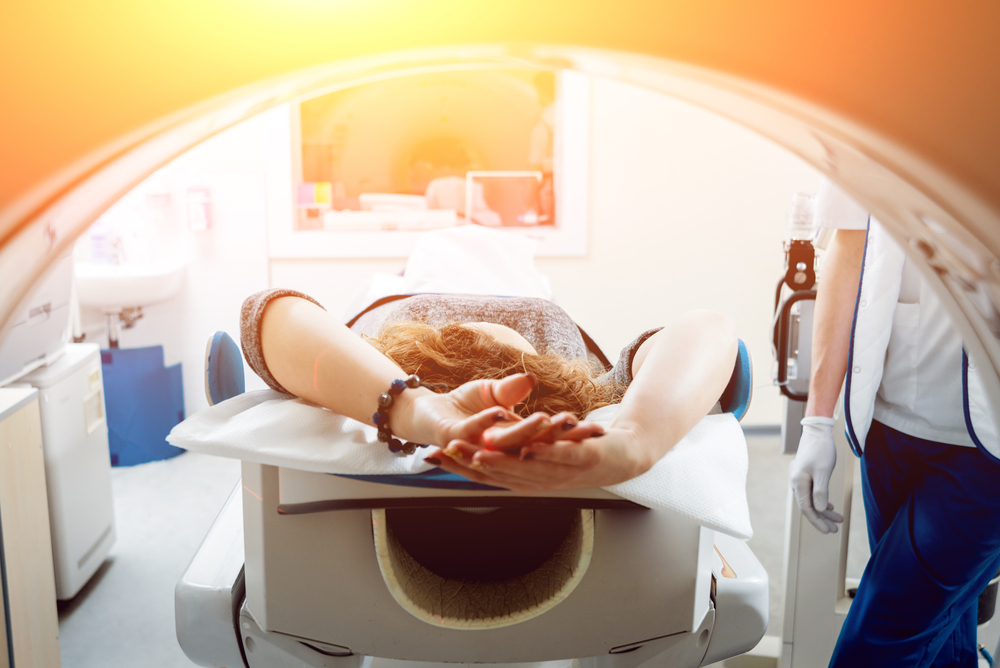 They help detect disease, evaluate abnormal growths, provide information about the stage of a cancer, guide certain procedures, and determine whether a cancer is responding to treatment.

Generally safer and less expensive than invasive procedures, like exploratory surgery, CT and MRI scans are two of the most common diagnostic imaging tests. But while both modalities achieve similar goals, the way in which they do so differs.

From how each modality works to why and when they’re used, understand the difference between MRI and CT scans with this in-depth guide.

What is a CT Scan? 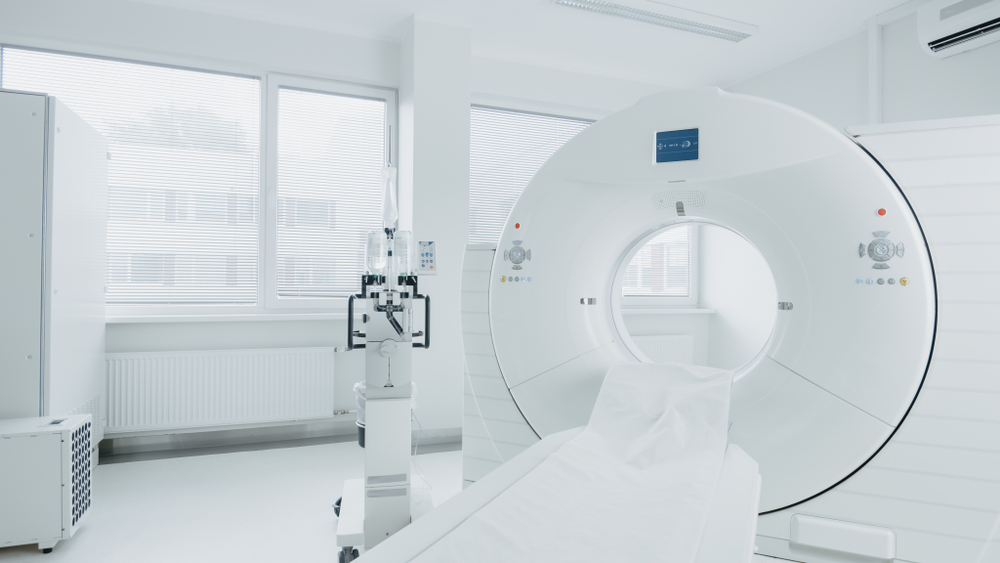 An x-ray machine sends one radiation beam to a still body. A CT scanner, on the other hand, sends out multiple radiation beams to a moving body, as it slides through the machine.

Once the scan is complete, the x-ray data is processed by a computer and combined to create either a 2-dimensional or 3-dimensional image.

What is an MRI? 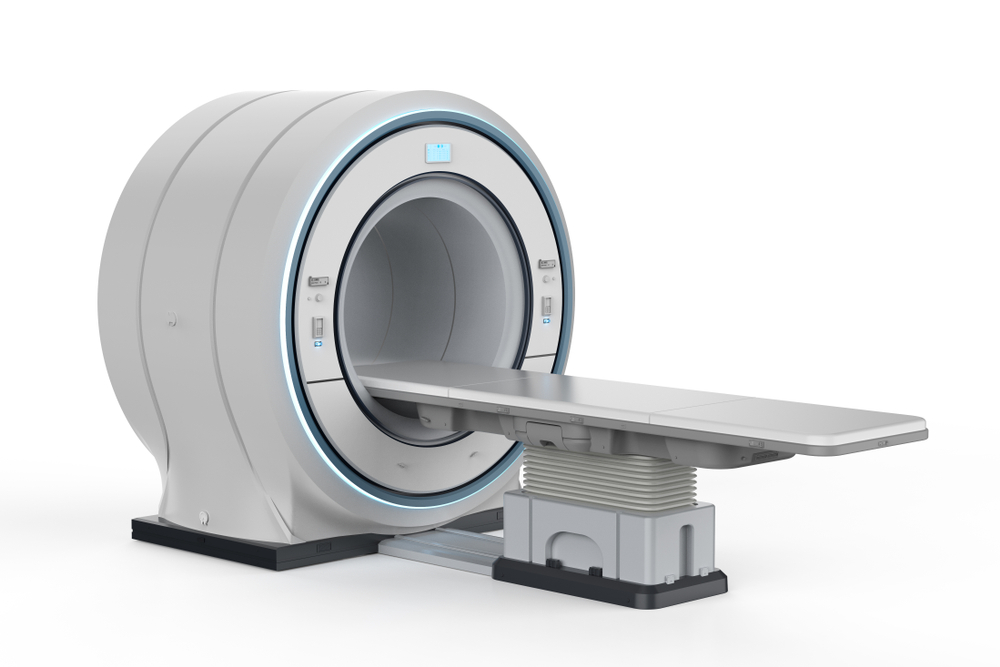 The human body is mostly made up of water. Water molecules (H2O) contain hydrogen nuclei (protons). These protons are constantly spinning with the body’s natural magnetic field.

When an MRI scanner emits magnetic waves to the body, it aligns to the protons. The scanner also sends out a radio frequency current that creates a varying magnetic field. This causes the protons to flip their spin.

When the field is turned off, the protons return to their normal spin in a process called precession. During that process, a radio signal is produced that can be measured by the scanner and computed into an image.

Difference Between MRI and CT Scan

CT uses x-rays, which require a small dose of ionizing radiation. MRI, however, does not use radiation.

Radiation can cause cell damage that leads to cancer. However, because the radiation dose of a CT scan is so low, the risk of developing cancer due to the scan is small. As a precaution, the American College of Radiology advises that no CT imaging be done unless there is a clear medical benefit.

CT scans are much faster than MRIs. A CT will take approximately 10 minutes, depending on what part of the body is being examined. An MRI test will usually take 45 min to an hour, again depending on the body part.

MRIs are more expensive than CT scans. Most insurance companies, however, will cover the bulk of any necessary imaging tests and only require patients to pay a copay or small portion of the exam. Without insurance, a CT scan cost will typically range from $500 to $3,000. An MRI scan cost is approximately $1,200 to $4,000. 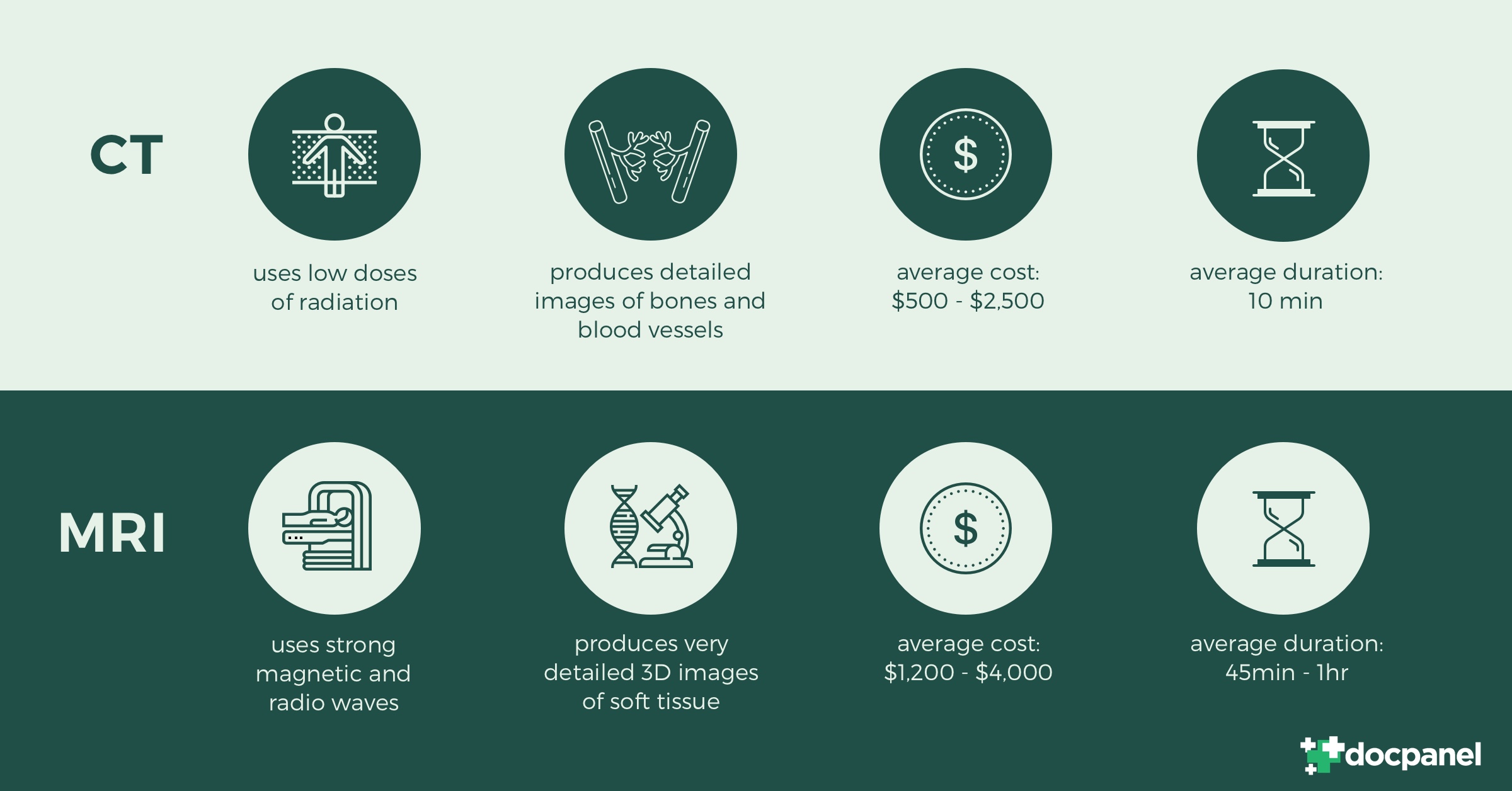 Accuracy of CT Scan vs. MRI

Both scans are invaluable tools for diagnosing and monitoring disease, injury, and other disorders. MRI is often used as a next step after CT because of its ability to image soft tissue better. However, the tests are just a part of the diagnostic process. The accuracy of an image also depends on the technician’s ability to correctly position a patient. And, most importantly, on the ability and expertise of the interpreting radiologist.

According to the BMJ Quality & Safety, each year over 12 million U.S. adults who seek outpatient medical care receive a misdiagnosis. Another study found that for some types of cancer, the misdiagnosis rate is as much as 44%.

To help reduce your risk of misdiagnosis, always ensure your scans are interpreted by a subspecialty radiologist and not a generalist. For serious issues, conditions that require treatment, or in the case that your scans were initially reviewed by a generalist, patients can benefit from a second opinion from a subspecialist. Even if the initial diagnosis is correct, a second opinion can provide peace of mind, confidence in treatment planning, or reassurance that everything is alright.

CT scans are better suited for imaging bones and blood vessels. They are used to:

MRI scans produce stronger images of soft tissue, joints, ligaments, tendons, the spine, and brain. They are used to:

Because MRIs are highly complex images, they can benefit from a radiologist with expertise and subspecialty training.

Generally speaking, CT and MRI scans are low-risk diagnostic tools. However, there are some factors that make each test unsuitable for specific patients.

Patients with the following implants and devices may not be able to have an MRI due to possible interference with magnets: Artificial joints Cardiac pacemakers Defibrillators An IUD Metal orthopedic hardware Any other form of metal in the body

In addition, patients prone to claustrophobia may struggle with an MRI or need premedication to tolerate the exam.

Women who are pregnant, or suspect they may be, should not get a CT scan because radiation can increase the risk of birth defects.

Both scans often use an intravenous or oral contrast dye. Be sure to let your doctor know if you have any known allergies to such contrast dyes.

Get your scans interpreted by one of the nation's leading subspecialists. Request a second opinion today.

What is a CT Scan? What is an MRI? Difference Between MRI and CT Scan Accuracy of CT Scan vs. MRI CT Scan vs MRI Uses Safety and Risks